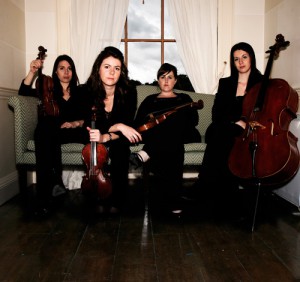 Born into a family of musical parents, sisters Aoife (violin) and Jenny (cello) were given music lessons from an early age. When Aoife was 11 years old, she joined the National Youth Orchestra of Ireland, where she met Siubhán (viola) and the two quickly became best friends! Soon after, Larissa (violin) also joined the youth orchestra and they formed a group together to go busking on Grafton street during School Holidays in the mid 90’s.

After school we each went our different directions to study Performance in Music. Siubhán and Larissa went to Cork, and Aoife and Jenny went to study in Manchester. Fast forward a few years and we were all back working as freelance musicians in Dublin and decided to form the Dublin String Quartet!

We gained our Masters Degree in Chamber Music Performance with the world renowned Vanbrugh Quartet in DIT and haven’t looked back since! We have been performing at weddings all over Ireland, recording soundtracks and performing at Festivals such as Glastonbury, Electric Picnic and Body & Soul. Individually and collectively, we have performed with artists such as Kodaline, The Coronas, Michael Bublé, Jamiroquai, Richard Clayderman, Julie Feeney, Il Divo, Jack L and Sinead O’Connor.